Late September  of 1996 was a happy time for our little family.  After almost ten months of living in a small apartment we finally found a house which met most of our criteria (western Hanover County with a fair amount of land) and came with a price tag we could afford.  Though the house was smaller than the one we had in Charleston, it came on a nicely wooded lot which included eight acres of land.  The size of the house was really not an issue because it was just the three of us.  During our search we were uncertain about the style, given Ben’s physical limitations due to the cerebral palsy.   Though Ben was six, we were still carrying him up and down the steps.  It was just a matter of time that his size would no longer permit this.  We looked at several ranch layouts which would eliminate having to deal with stairs.  However, I’ve never been a big fan of that particular style, so we ended up settling on a colonial which had all three bedrooms on the second floor.  We knew Ben was getting stronger and we were going on blind faith that as he did, he would soon be able to maneuver the steps on his own.   Once again, Ben did not disappoint us.  Within a few months of moving in, he was safely going up and down the steps unassisted.  We did however place a pretty substantial gate at the top of the stairs in case he wandered out of his room at night.  In October we moved in and after almost a year began to unpack our long lost belongings.  It had been a year of ups and downs, but life was finally beginning to feel normal again.  Little did we know that in a few short months, life as we knew it, would change once again.

My feelings at this point:  Uncertain.  Though I was happy that we were finally settled, I must admit, I missed my life in Charleston.  Again, there is no question we did what we had to, but my old self-centered personality was reemerging.  I can remember feeling sorry for myself a lot during this period of time.  This came from dissatisfaction with my work situation.  It was clear I still had a lot of growing up to do. 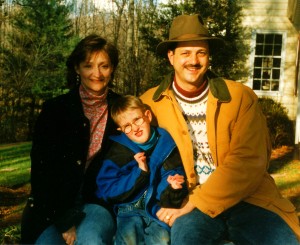 One of our first pictures next to our new house.