A Plea to Judge Gibney

On February 18th, I posted an article called Virginia Finally Gets It Right which outlined the historic agreement between the Commonwealth of Virginia and the Department of Justice.  This would finally move Virginia toward serving its disabled citizens through community based systems as opposed to the old model which favored institutionalization.  Judge John A. Gibney at the United States District Court will now decide whether to approve the settlement agreement.  However, that has been delayed because a group representing families of people who are being served in institutions has filed suit to stop Virginia from closing four of its five training centers.  The Judge has said that he will take written comments until April 6th and sometime after that there will be a final hearing.  Below is the letter I sent to the Judge:

To the Honorable John Gibney,

I am the mother of Ben, a 22-year-old man with a rare chromosomal disorder called trisomy 9.  Ben has an intellectual disability and physical limitations due to cerebral palsy.  Though he is non-verbal Ben has always had an instinctive ability to communicate his wants and needs.  He spent nineteen years in the local public school system, and I am very proud to say that he graduated from Patrick Henry High School last June.  When Ben was born, it took an entire year to get a diagnosis because of the rarity of his condition (at the time there were six documented cases).  According to the case studies my husband and I received, there was little hope that our son would live to see his tenth birthday.  Though there have been tremendous challenges throughout the years, there was never a doubt that we wanted to care for our son in our home.  Last year, when Ben’s years in public school were coming to an end we found out that he had been selected to receive a Medicaid ID waiver.  The services provided to us by this waiver have been a blessing to our family.  Without it, I can honestly say that I do not know what we would have done after Ben’s graduation.  My husband and I both work and Ben has two younger brothers who also deserve our time and attention.  More than likely, one of us would have had to stop working, because taking Ben out of our home was not an option.  He is an important part of our family, and though his disability can be considered profound, he can, and is being served in the community.  Currently, he attends a day support program in Hanover County and is having a great time delivering “Meals-on-Wheels”, and helping the guys at a local fire station by sweeping the floors.  Ben loves being out in the community and meeting people.  He also loves coming home to be with his family every evening.  Ben is the happiest person I know because he is living a normal and dignified life thanks to the Medicaid ID waiver.

There are thousands of Virginians who are not as lucky as Ben.  They have been placed on a waiting list that is very long and getting longer.  The DOJ settlement agreement gives hope to those thousands, that there will finally be a significant effort to reduce that list.  Please consider signing the agreement, so that many more will have a life like Ben’s.

If you would like to make your feelings on this subject known to the judge, his contact information is below.  The Arc of Virginia has put together a very good article which outlines exactly why this is so crucial for the future of all of Virginia’s disabled community.

It can be found at http://www.thearcofva.org/docs/2012_Advocacy_Booklet_WEB.pdf

Here is another family’s story  http://lovemy4littlehams.blogspot.com/2012/03/step-up-to-plate-virginia.html 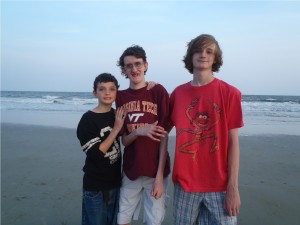 The happiest guy I know with his brothers

2 Responses to A Plea to Judge Gibney